Climate Change Knowledge
To have a voice in avoiding global climate catastrophe we need to know how to access and  to interpret the reliable science..
IPCC  AR4 FAQ Science
Risk
​There is ofcourse a science of risk assessment but the climate change science does not assess for risk. The reason for this is that the governments whop decide what the IPCC assesses have not asked for actual risk assessments.

We do know what the worst imapcts and greatest risks are.

1. Positive amplifying feedbacks​​
By definition these are the worst because they accelerate global warming.​
All models show that the many +ve feedbacks that globalwarming leads to. They differ only in hnow much warming these feedbacks will cause.

​​None of the assessments inlclude the largest feedbacks that are in the Arctic (excpet for Amazonand die back)
They are first  the three huge Arctic snow and ice sources of albedo cooling - wit the melting of snow and ice (especially summer sea ice) there is an amplifying feedback to the Arctic (operating already) the Northern hemisphere and it is assumed the planet globally.
Next the several Arctic carbon feedbacks that add more GHGs to the atmosphere- mostly as methane a very powerful GHG. Artic warming causes the Arctic to emit all three main GHGs - CO2 methane and nitrous oxide. .​​

​​​
2. Food
All models show that all crops in all regions go into decline which increases progressively with increasing temperatures.
The climate ​crop models are as yet poorly developed and fail to capture about half of the adverse impacts.
​
The link to the Arctic is that the Arctic white cooling albedo is the summer air conditiooner for the entire N hemisphere.
​The loss of Arctic albedo is alreasdy leading to more NH extreme heat, drought, and extreme unseasonal weather. ​​

3. Deep Ocea Conveyer​​
The scientists have always warned that ​enormous volumes of fresh water pouring  into the North Atlantic ocean from the melting Arctic would slow and possibly stop the deep conveyer of heat. By stopping the influence of the warm Gulf Stream currnent on Europe much of Europe would freeze year round and devastate agricuture there. There is now evudence the deep conveyer is slowing already.

4. Sea level rise​​
This is the one ​we have all about, but it is far from as deadly as the others above, because it affects coastal regions only, and happens extremely slowly. It is due to melting land ice poring water inot the oceans from  coastal glacers Greenland ice sheet and Antarctica. Sea level is aleady rising.

It would submerge and so wipe out Small Island ​​States, but increased storms caused by global warming is already damaging to the food security of these islands.
Commitment to much higher degree and duration of future global warming.

There are several science definitions of commitment.
S​cientists ​​usually treat commitment as only the commitment to future warming due to the ocean lag, but as
​the IPCC points that is much less than the practical unavoidable commitment.
​Future commitment calculations depend on the what the climate sensitivity is.
The ocean heat lag and the very long atmospheric  lifetime of CO2 makes today's total 'equilibrium' commitment (long after 2100) about double today's warming (NRC Climate Stabilization 2011). ​

The latest 2015 research by K. Zickfeld makes the situation clear. ​​

'​​Our results indicate that as CO2 continues to accumulate in the atmosphere, the full warming effect of an emission may take several decades, if not centuries to emerge.
​A large fraction of the warming, however, will be realized relatively quickly (93% of the peak warming is realized 10 years after the emissions for the 1000 PgC pulse). This implies that the warming (future) commitment from past CO2 emissions is small, and that future warming will largely be determined by current and future CO2 emissions. Each additional CO2 emission will contribute to warming that will persist almost indefinitely. Thus, emission reductions implemented today will equally benefit current and future generation'.

This determines what the degree of warming is predicted to be.​
​
The climate sensitivity is a number that determines all of the climate change assessment​​ because it defines how much warming is projected to occur as a result of addition of GHGs to the atmosphere.

The IPCC says It is broadly defined as the equilibrium global mean surface temperature change following a doubling of atmospheric CO2 concentration .
​​
This number has a very wide range of possibilities- from ​​2 (a warming of 2C) up to 6 (warming of 6C).
​
The number generally used by the science is 3 (3), but this single linear metric only applies for our global warming ​over a period of decades, When amplifying feedbacks start adding to the warming the sensitivity increases right up to 6.

Even for the 3C metric the models give a possible range several degrees higher than 3. The IPCC says that ​​the sensitivity could be up to 4.5 but very unlikely higher.

​​​Climate change commitment
​The single most imprtant definite fact of the science regarding impacts is that today's global warming is only a fraction of the warming that today we are abolutely committed to and global warming is 'for ever' thousands of years.

In climate science commitment usually is taken to mean the ocean heat lag extra warming 'in the pipe'
​​​but the total unavoidable commitment is much more.

Zero carbon emissions ​​
The single most important fact of the science regarding mitigation or solutions is t​hat, because 20% od CO2 emissions last for 1000 years (and with today's atmospheric CO2 has increased 40%) only stopping all industrial carbon emisssions can allow the global temperature and ocean acidification to stop increasing (onlyzerocarbon.org).
​

Positive feedbacks is what the science of climate change impacts is all about. There are many of them, with the largest sources being Arctic These feedback amplify the direct warming caused by industrial GHG emissions.
AGU Observer ​feedback papers.   They are part of today's commitment and they apply to zero carbon for mitigation.

Greenhouse gas pollution
​The science is actually the science of greenhouse pollution and that is not only climate change.
​Fossil fuel air/atmosphere combustion, which is the main source of GHG pollution is also harmful due to air pollutants, that also affect climate.
This is because of the well known air pollution climate affecting aerosols (minute suspended particles) emitted by fossil fuel combustion. ​
Air pollution black carbon soot (​diesel engines worst) is the second global warming pollutant to CO2 (Bounding black carbon ... 2013). This greatly increases the global warming effect of  fossil fuel emissions.
​
Another component of fossil fuel air pollution is the well known ​acid rain cause- sulfate acid aerosols. This is a global cooling agent,but that is also bad news also because it is deferred inevitable committed future warming. The 'unmasking' of this hidden warming is a commitment because global air pollution will be cleaned up and more to the point we must switch off fossil fuel energy because only zero carbon emissions allow global temperature and ocean acidification to stabilize./ The IPCC rates the global cooling effect at 0.4C up to 0.8C. This means when we do quit fossil fuels there will be a fairly rapid large pulse of extra warming.
​
So if you know greenhouse gases and GHG emissions you already know global climate change. ​
The schematic shows that constant emissions of GHGs has to lead to global climate planetary catastrophe.
The reason is there are so many powerful amplifying feedbacks that global warming causes.
​The more emissions- the more warming- the more feedback- the more warming ...etc to catastrophe.

Atmospheric CO2 emissions and  concentrations.
There are two expressions in science of CO2 - CO2ppm GHG (only) ​ ​​and CO2e/eq standing for CO2 equivalent which rolls ​in the other main GHGs. CO2ppm is convenient but in assessments and mitigation CO2 eq should obviously be used.
​​​

Climate change science indicators
​
Radiative forcing​
​The best single indicator is the radiative forcing or total heat
​added to the climate system. It directly correlates with the amount of
greenhouse gases there is in the lower atmposphere- that warm the planet's
​surface,.​warm the oceans, and melt snow and ice.
​
Most of the heat goes to the oceans.
​ A lot of heat is going to melting snow and ice.
The global average surface temperature increase is ​​from the heat left over.

​​IGBP Climate change Index
This (to the left) IGBP climate change index is a more reliable guide that only the global average tmeperature increase. ​It accounts for the fact that most of the added GHG heat has gone to warming the oceans- sea level rise. It accounts for the great deal of heat gone to mnelting planetary ice- Arctic summer sea ice extent decline. It is a very good learning tool. 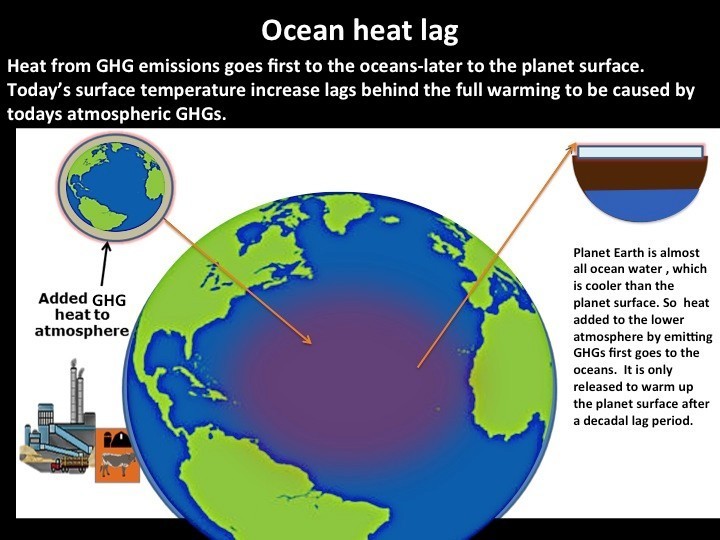